Atlantic Towage and Marine Ltd have completed their biggest salvage contract to date together with Blue Ocean Marine after successfully raising the tall ship Astrid.  The complex salvage operation saw the Astrid being lifted from rocks where she sank in mid July and lifted onto a floating barge.

The 42m tall ship Astrid was taking part in a Gathering cruise, bound for Kinsale, when on 24th July she experienced engine failure and was blown onto rocks near the Sovereign Islands off Kinsale during strong southerly winds.

The main vessel involved the operation was Atlantic Towage and Marine’s tug Ocean Bank, used as a dive support vessel and was assisted by the 15m tug Trojan, their pilot boat Ocean Lad was used as an oil pollution response vessel, and also used in the operation was the high speed RIB Ocean Runner.

Atlantic Towage & Marine hired a sheerlegs from GPS Marine to carry out the lift.

Prior to the lift, divers cleared loose rigging and debris from the Astrid, fitted heavy-duty straps to the vessel’s hull, and sealed fuel lines and fuel tanks, to prevent 3.5 tonnes of diesel, which remained on the vessel from causing a pollution hazard. The Atlas, which has a 400 tonne lifting capacity brought the 300 tonne Astrid to the surface in an operation, which took several hours

The Atlas, with the Astrid suspended from its boom made its way to Kinsale harbour where the tall ship was moved onto a flattop barge, secured and hander over to the owners and insurance.

Following the salvage operation, divers from Blue Ocean Marine (Atlantic Towage & Marine’s sister company) conducted an underwater video survey of the wreck site, which was passed onto the Coast Guard. 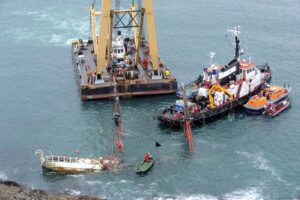