Atlantic Towage & Marine were tasked in refloating a French fishing vessel at Castletownbere in late November.

The 22m vessel MFV Bara Brenn was attempting to navigate the channel leaving the harbour when she ran aground.  The incident happened approximately 300 metres from the quay at Dinish Island. It was established that there was no immediate danger to either the crew or the vessel, and a

decision was made to refloat the vessel at the next high tide, which was due in the early hours of the following day.

The Oceanbank was used in the operation, and the Barra Brenn was successfully refloated just after midnight. The vessel then made her way to the pier at Dinish Island where she was inspected for any damage to her hull.

During the operation, three Irish naval vessels which had been anchored off Bere Island were placed on standby to assist in the operation if required. 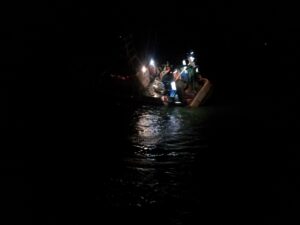