Dangerous cargo containers which toppled off a chemical ship were floating towards Irelands south-west coastin September 2012. It is understood that some harbour hazardous chemicals which could present a danger to transatlantic vessels on the main shipping lanes. The containers slipped off German-registered ship MSC Flaminia, which caught fire on Jul 14 (small photo). It caused an explosion that forced the crew to abandon the ship. Salvage operations were under way yesterday as some of the containers were towed into Castletownbere, West Cork, by tug boat Ocean Bank of Atlantic Towage & Marine LTD, Bere Island, West Cork. The Hamburg-registered ship had originally been on its way from Charleston in the US to the German port of Bremenhaven. The 85,823-tonne vessel was carrying 2,876 containers, 149 classed as dangerous goods.

The surviving 24 crewmen were rescued from a lifeboat. The ship started listing and some of its containers fell into the sea, about 1,600km from land. The MSC Flaminia remained listing until authorities in Britain, France, Belgium, and the Netherlands cleared it for passage to be towed through the English Channel. It recently arrived in the German port of Wilhelmshaven.

Now, some of its containers are appearing off the south-west coast and floating into the Atlantic’s main cargo shipping lanes. The Atlantic Towage & Marine Ltd-owned tugboat The Ocean Bank, skippered by Bere-Island-based Sean Harrington, was asked to recover some of the containers. “They were about 80 miles south-west of the coast when we located them and towed them back,” Mr Harrington said. “The three we recovered were empty.” The tug boat was sent out again to bring in another six containers in the following days. “Some of them were floating into shipping lanes and that would cause concern for other vessels,” Sean Harrington said. 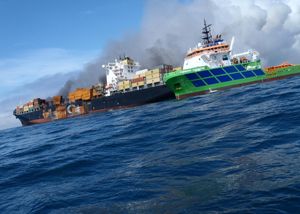