Atlantic Towage & Marine were recently contracted by the insurers to raise  a sunken fishing boat outside Cork Harbour. They were assisted by personnel from Blue Ocean Marine.

The  Peggy M, a Cygnus 38 class boat with one crewmember onboard was out fishing in late November, when a call was made to Valentia Coastguard that the vessel was in distress.  The fisherman managed to launch an onboard lifeboat and was picked up by the Ballycotton lifeboat.  The Peggy M sank soon afterwards.

Using the tug Oceanbank, Atlantic Towage & Marine raised the vessel to the surface using inflatable marine salvage airbags, and its onboard deck crane.  Once raised the Oceanbank’s crew used onboard salvage pumps to pump out the vessel, her engines were flushed down and put running before the fishing boat was towed to Castletownbere harbour. 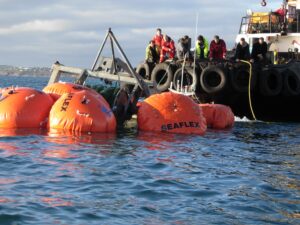 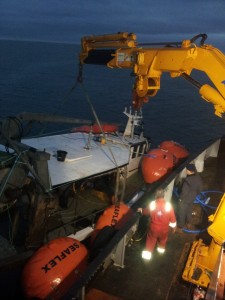